Two weeks left in the Spring PvP Season—let’s see where we stand! Several Sorcererers competing for the top spots in Most Wins this week, and the Highest Rated category has over 50% of its roster repping guilds. Average rating among the Highest Rated is at an all-time high—despite ratings at the top dropping this week, more rating points than ever seem to be concentrated at the top of the ladder, suggesting that the expected rating inflation resultant from Yogscast sending us thousands of new ranked players has begun. Standing isn’t particularly high this week, but it’s also not particularly low. Worth noting that despite the tremendous increase in ranked players, the number of players in bad standing has remained constant at 550—meaning that the percentage of tankers has fallen from 3% to 2%. Overall, the ranked playerbase seems healthier than it’s ever been.

With two weeks remaining in the season, it’s increasingly unlikely that there’ll be any major upsets. Still, some of the top slots remain in contention. Let’s see who’s in the lead right now: 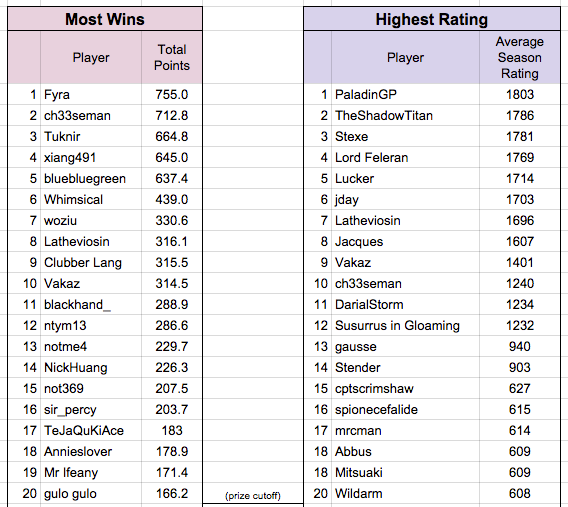 It’s going to be a tight race between Stexe and TheShadowTitan for 2nd place in the Highest Rated. In Most Wins, will ch33seman be able to overtake Fyra? Tuknir could easily fall from 3rd—xiang491 is steady and hasn’t missed a week of the season. At the halfway cutoff, Vakaz and Clubber Lang are in danger of losing out on the slime of their choice if blackhand_ and ntym13 keep winning.

Tensions are high—largely because 13 weeks might be a bit long and some players are burning out… but I’m excited to announce the winners in two weeks!

I’ll be on vacation next week, and unable to blog, so I’ll see all you fine readers at the end of the season.