Stats from Week 10 of the Spring PvP Season with Flaxative. 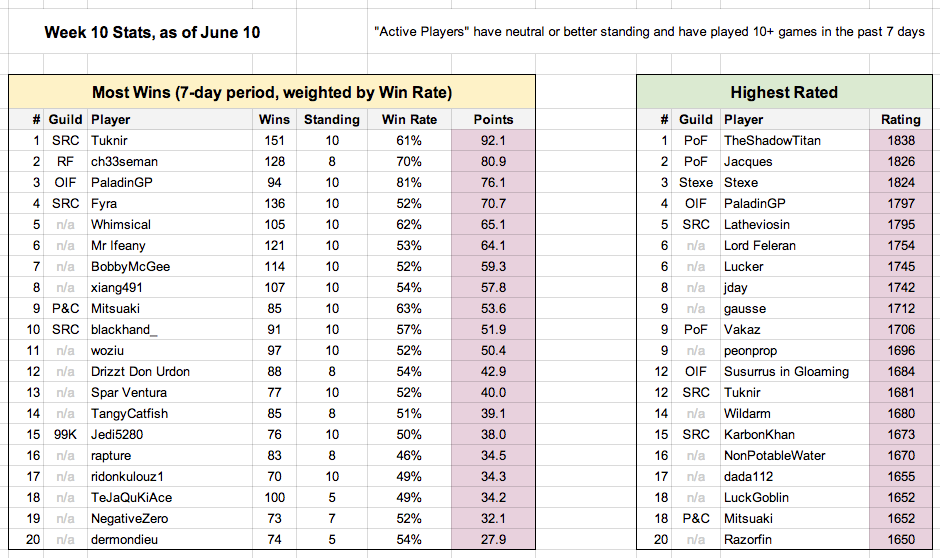 A lot of new names in the Most Wins category, and some shake-up in the Highest Rated category.

PaladinGP and Stexe, the two highest rated players over the course of the season, agreed to play a match against each other, which Sorcererer Fyra recorded! It’s a slugfest with a lot of player complaints about bad draws and Whirlwind luck—to which any observer can just say, “well, what can you expect of Whirlwind?”

And if you want to see discussion of the match, there was a forum thread.

Both players in this match appear to be running variations on PaladinGP’s classic Divide and Conquer build. Around the time the video was posted by Fyra, another user posted guesses and analysis regarding Stexe’s build—which was basically D&C with Vibrant Pains (remember how that item is fair? No? I wrote a post about it). PaladinGP then posted his own build in the interests of perceived “fairness.” You can find both builds in this thread: High Level Competitive Builds.

Despite the fact that both players are essentially running minor version updates or iterations on a well-known build, some sparks flew when involved parties didn’t like the fact that their “secret tech” was revealed. There were even accusations of build theft! Exciting times in Cardhuntria, folks.

So you see it here: the two best players in the game (arguably) use the two most broken things in the game (Whirlwind and Nimble Strike, not arguably), and the loser complains that it came down to luck.

Someone somewhere said, in the last week, that the PvP Season sucks and is doomed to “failure” because the game isn’t balanced. Valid constructive criticism for me? I don’t know. The only complaints I’ve received have been from the very top of the charts—people who run the cheese, subscribe to the cheese, love the cheese. It’s hard to take their feedback seriously, so you, the average reader, what do you think? Should Card Hunter not have competitions until the game is immaculately balanced?

There were fewer active guilds the last two weeks, but some of them are growing. Ninety-Nine Knaves in particular is growing quickly and becoming a serious contender for guild points, placing on the charts for the first time last week and again this week. It will be interesting to see how the final charts favor the different guilds.