Card Hunter releases on the 12th of September!

Woo! Double woo! We have exciting news – Card Hunter will be officially released on the 12th of September 2013! We used to call this “going gold” in the Jurassic era of video game development. How quaint! In this confusing age of never-ending betas, we thought we would strike a blow for clarity and just declare Card Hunter live.

First of all, thank you so much to 40,000+ folks who participated in the closed Beta. Vicious Thrust is too vicious! The Trogs are too hard! McDonagh, your grammar is atrocious! We heard you. We tracked your data. We argued long and hard about what it all meant. You helped us squash bugs, balance maps and improve the game. Thank you for being part of building this game. We couldn’t have done it without you.

Also, a very special extra “thank you” to everyone who purchased pizza during the Beta. We really appreciate the help you gave in funding this game through its development. From now on we’ll be removing the special Beta figures from sale, so if you got these you’ll always be part of an exclusive club.

So, what does “Live” actually mean?

Launch Special – Get the Basic Edition, Get Figures Cheap! 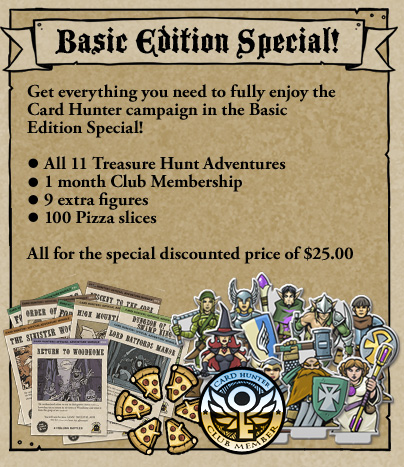 To celebrate the launch of the game, we’re running a special promotion. Jump into Card Hunter at launch and get the new Basic Edition! The Basic Edition contains everything you need to get started, including all the single-player content, extra figures, Club membership and more. If you haven’t already started playing, the Basic Edition is a great way to get into the game.

In addition, to supplement this, we’re lowering the prices on the nine adventurer figures that are included in the Basic Edition. If you’ve got pizza to spend, you’ll be able to pick up any of these figures for less than half price in Cuthbert’s Costumes!

Here are some answers to your questions:

Why Did Beta Take So Long?

The biggest reason is that we wanted to stress test our server infrastructure to ensure that it could accommodate lots of players. We very much hope that we now have a stable and scalable game. However, we’d really value your patience as we work through the challenges of growing the game.

Is This the End of Development?

Heck, no. Unless the game tanks  and we all have to go and get real jobs. We very much intend to keep working on the game and will update you with our plans as we go. We have big ideas for improving Card Hunter. In the future will be more cards, more items, more adventures and many more things beyond!

Finally, we wanted to say a heartfelt thank you to the ladies and gentlemen of the forums. We can’t thank you enough. We’re sure we’ve left many people out here but we want to say a special thank you to the folks who were tireless in their work in making the forums a happy place: SirKnight, Pengw1n, Wozarg, Assussanni, Lance, Jayce, Phaselock, Zalminen, Neofaolcon, Skip_intro, SurgeonFish, Roshirai and MightyMushroom, we salute you!

Finally, please join us in the conversation in the forums at forums.cardhunter.com/ and let us know how we can keep on improving the game. We read them everyday. You can also follow us on Twitter:  @BlueManchuGames and @JoeWMcDonagh. Onward brave Card Hunters!

23 Responses to “Card Hunter releases on the 12th of September!”